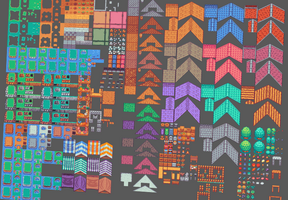 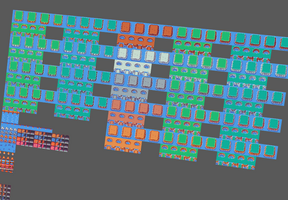 The new update for the Rural Village tileset is here! I went a little bit overboard on this one and added over 1400 new tiles! A large amount of the existing tiles have been improved too, matching the quality of the newer sets.

The biggest additions and changes are in the terrain and building tiles. There are now a lot more cliffs, grass and dirt tiles, as well as house walls and roofs, which now have peaked and flat variations.

There are also changes to the marketplace tiles, the stalls now surround vendors and have more products on display, which now look a lot nicer and more detailed than before.

There has also been a change to the way the tiles are organised. With the large addition of assets, the tilesheet was unmanageable and confusing. The tiles are now split off into separate sheets, allowing for you to more easily find tiles and for me to make future updates.

A brief list of additions and changes is below, I don’t have a changelog or anything, but let me know if you’d like one!

If you’re not keen on some of the new changes, all of the tiles that were altered are included on a separate sheet. They won’t be supported any longer, but are there if you need them.

You can use these assets in any game project, commercial or non-commercial. Credit isn't necessary but very much appreciated. If you do make something using these assets, let me know, I'm excited to see how people use them!

You can edit the assets as much as you like, but cannot repackage, resell or redistribute them in any way, no matter how much they're edited. These assets cannot be included in game making tools or code templates.

Something you want/need, that's not part of one of the packs? I'm available for commission! Contact me via Twitter! You can also commission small things like sprites and tiles via Ko-fi!

Ko-fi supporters will receive a download key for the Quiet Cabin pack! Check the "Thank you" message!

You can also support me by purchasing the other World of Solaria tileset packs!

16x16 tiles and sprites for your top-down games!

Great job! Excited to check it out

Thank you so much! Enjoy!